We are in the ratings 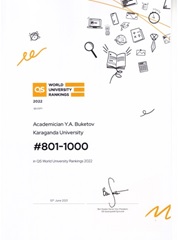 The British agency QS (Quacquarelli Symonds) has been ranking the universities of the world for more than 10 years. Every year, QS evaluates about 3,000 universities, choosing the best of them.
www.topuniversities.com 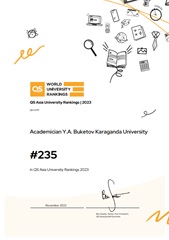 Karaganda Buketov University was ranked 235 by QS Asia - 2023. QS Asia is a cardinally new ranking for universities of Kazakhstan, which annually ranks more than 800 of the strongest universities in Asian countries such as Singapore, Malaysia, South Korea, China, etc. This year, for the first time, 41 Kazakh universities took part in the QS Asia ranking. topuniversities.com

IAAR: INDEPENDENT RANKING OF UNIVERSITIES OF THE REPUBLIC OF KAZAKHSTAN – 2022

Karaganda Buketov University has got the 4th position in the National University Demand Ranking for 2022.

The Independent Agency for Accreditation and Rating (IAAR) has been conducting the National University Demand Ranking of the Republic of Kazakhstan since 2014iaar.agency

IQAA: RANKING OF THE BEST MULTIDISCIPLINARY UNIVERSITIES OF KAZAKHSTAN - 2022

33 university programs are in the first half of the list of those participating in the ranking. atameken.kz

By the results of 2022 Global Aggregated Ranking, Karaganda Buketov University entered the TOP10% of the best universities in the world.

2022 Global aggregated ranking is based on the results of the rankings for 2021. 124 countries and 3382 universities are represented in this ranking. Kazakhstan is ranked 30th in the Global Aggregated Ranking of 2022. . best-edu.ru